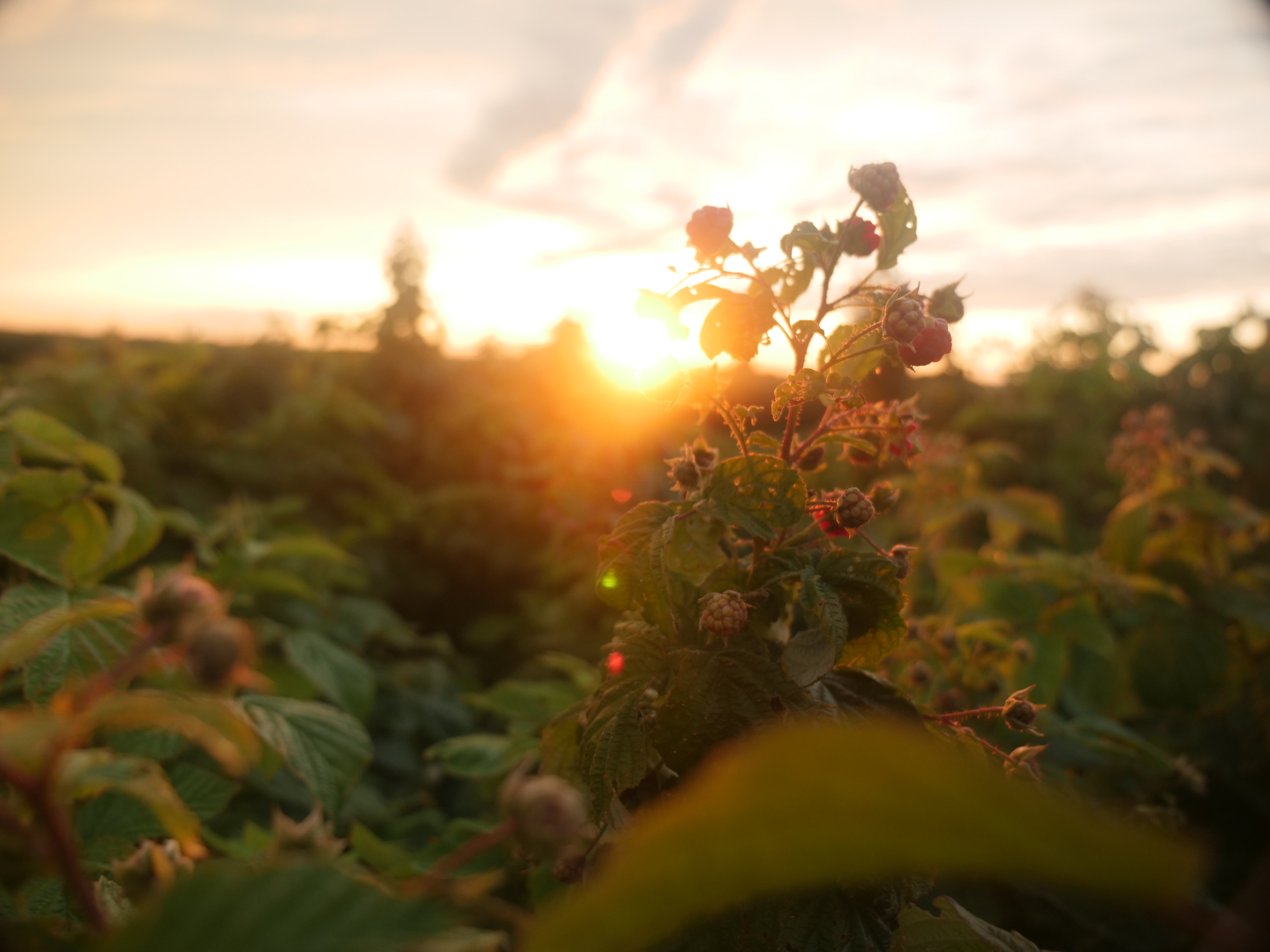 What fascinates me is thinking about the garden of Eden, in light of gardening practices today. Some things would have remained the same. There would be land and plants. But other things would be entirely different… before sin, you wouldn’t have plants dying from pests or disease. The sun wouldn’t scorch the plants. You’d have enough water for them. There were no years of famine. It would have been a special place (to say the least), and that’s what we see presented in the Bible.

Moses writes in Gen 2:7–8, “Then Yahweh God formed man of dust from the ground and breathed into his nostrils the breath of life; and so the man became a living being. And Yahweh God planted a garden in Eden, toward the east; and there He placed the man whom He had formed.”

God made Adam out of the earth that He just spoke into existence with a word, five days earlier. Subsequently, God planted a garden and put the man there. It is a garden before sin. The colors, fragrances, tastes, and growth were unaffected by the fall. It’s quite a stimulating thought.

I want to draw your attention to two observations which we will pair with the gospel of John later. The first observation I want to draw your attention to is found here. New life is found in the garden. Adam has just been fashioned and is in the garden. Adam is the first human to exist. His life is breathed into him and his direction is seen in him, as a new creation, beginning in a garden.

Next, we see what occurred within the garden in Gen 2:9. “And out of the ground Yahweh God caused to grow every tree that is desirable in appearance and good for food; the tree of life also in the midst of the garden, and the tree of the knowledge of good and evil.” The garden is full of produce that God causes to grow. It is a picture of God’s kindness as the fruit is good for food which should reveal God’s own character to Adam.

God made rivers and then tasks man with his job in Gen 2:15–17. “Then Yahweh God took the man and set him in the garden of Eden to cultivate it and keep it. And Yahweh God commanded the man, saying, ‘From any tree of the garden you may surely eat; but from the tree of the knowledge of good and evil, you shall not eat from it; for in the day that you eat from it you will surely die.’”

There’s more here than I will comment on. Suffice it to say, Adam is placed in the garden as God’s representative. That’s the second observation. Under God, Adam is tasked with ruling over the garden and that expands to the rest of the land and created order (cf. Gen 1:26–28). Adam is called to be faithful as God’s vice-regent. He is without sin, but his faithfulness must be proven. That’s seen in the wording of Gen 2:17.

So, life is breathed into the dirt, and Adam exists, he’s commissioned to be faithful as God’s representative, and his occupation is that of a gardener. Things are looking great.

As the story goes on, Adam sins. He betrays God and does the only thing God prohibited him from in Gen 2:17. Adam ate the forbidden fruit (cf. Gen 3:6). From that moment on, everything changed. Mankind was dead in sin. Man’s relationship with God was fractured. Sin tainted man, making him depraved. The colors, fragrance, sounds, and beauty of the garden of Eden too would have diminished. Sin affected the world over because of Adam’s sin. We have all been affected, but one Man.

There’s a particular detail in the gospel accounts that gets lost amid other heavyweight theological realities, but I want us to pause to bring it to the forefront of conversation and shine a light on it. It’s something that God emphasizes not once, but twice. It’s a connection that brings us back to Eden.

As the old news expression goes, “we report, you decide.” In this case, I will report two connections, and you will have to determine if you believe they are connections that are hidden in plain sight. To do this, I want to draw your attention to Jesus in the garden. Not the garden of Gethsemane, but rather, let’s give a view toward the garden of His burial.

After Joseph of Arimathea and Nicodemus come together to prepare Jesus’ body, we are given a description in John 19:41. “Now in the place where He was crucified there was a garden, and in the garden a new tomb in which no one had yet been laid.” When most people look at this verse in the context of John’s gospel account, they are drawn to the fact that Jesus was placed in a new tomb. That is a significant detail, but it’s not the only one we see here. We are told twice in one verse about the garden that Jesus was placed in.

Some might be quick to say that the garden was merely the location for the tomb and that one shouldn’t read much into it. That is a fair remark. After all, there are gardens in many cities. Having said that, I want to challenge that line of thinking with a couple of questions. First, is there any chance that it was an accident that a garden was placed in Jerusalem where people were buried? Second, would Jesus’ tomb have been placed in a garden unless God wanted it to be in a garden specifically (since this was not the only location for burial in Jerusalem)? Again, you could say it’s a coincidence, but I would say it’s providence. It’s an example of God orchestrating the placement of a garden for this specific moment in history.

Earlier, I showed you two observations, now they become two connections. The first observation was that in Adam, new life was found in the garden. Here we see that Jesus was buried in a garden, but in Luke 24:1–6, we read, “Now on the first day of the week, at early dawn, they came to the tomb bringing the spices which they had prepared. And they found the stone rolled away from the tomb, but when they entered, they did not find the body of the Lord Jesus. And it happened that while they were perplexed about this, behold, two men suddenly stood near them in dazzling clothing, and when the women were terrified and bowed their faces to the ground, the men said to them, ‘Why do you seek the living One among the dead? He is not here, but He has risen.’” In the garden, as we saw Adam’s new life, we see Jesus’ resurrection to life. As a man, Jesus truly did die (cf. John 1:14; 19:30). In the resurrection, as a man, He truly did come back to life. There was the breath of life in the garden, once again.

Furthermore, it is because of Jesus’ resurrection to life that we all will be raised as well, for those who believe in Jesus (cf. 1 Cor 15:23–24). In Jesus’ resurrection in the garden, we are guaranteed new physical life in Jesus forevermore. While in Adam, there was new life one time, through Jesus there is new life from what occurred in the garden millions of times over.

The second observation was that Adam was God’s representative in the garden tasked with keeping it as a testing ground of faithfulness. In Jesus, His resurrection from the garden isn’t a testing ground for faithfulness, rather His resurrection is the proving ground of His faithfulness. Where Adam failed, Jesus did not. He was entirely faithful to the Father as Man’s representative, whereas Adam was not (cf. Rom 5:12–21). Jesus fulfilled the law (cf. Matt 5:17–18; Rom 10:4). He was without sin and perfectly righteous (cf. Matt 3:15; 2 Cor 5:21; Heb 4:15; 1 Pet 2:22). The resurrection was a confirmation from the Father of everything Jesus promised (cf. John 10:17–18; Gal 1:1). Jesus is the perfect representative for man, as He is perfect God and Man. Adam sinned and could not save us. Jesus did not sin and was the only One who could through His death and resurrection.

The resurrection shows us, to borrow the words of Matt Papa, “the true and better Adam come to save the hell-bound man, Christ the great and sure fulfillment of the law; in Him we stand.” Jesus rose as the successful representative of man on earth and will represent all of His people forevermore. What wonderful news that is!

I believe that Jesus’ placement in the garden is an intentional, providential, God-inspired, connection back to the garden of Eden (cf. 2 Tim 3:16–17). Jesus rises from the dead as the greater Adam who succeeded where Adam failed, and He will reign forevermore over His Edenic kingdom on earth as King of Kings and Lord of Lords. As we long for that day, I hope in this small, but significant detail toward the end of John you find solace and encouragement for your soul.